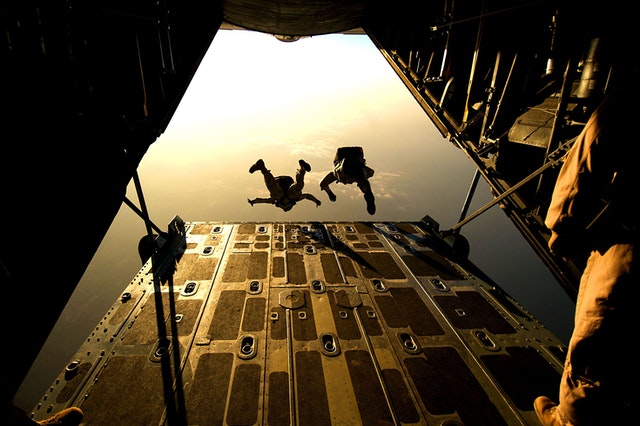 It was a one time deal, Thousands of people stopping by him,

Narrating all their fears to him,

He could see everyone’s face go pale as he dived with them from 16,000 feet,

Everyone had a confession before jumping off the plane,

Everyone had a ritual to perform,

For a few, it was a way to escape the harsh reality,

For others, it was a way to discover themselves,

Where people failed to look through the boundaries,

He gave a new insight, He showed them a new world from up top,

Few prayed their way down,

Few preferred to enjoy the moment by being unconscious,

A single mistake could take two lives, And several other’s,

For him, this was the way he earned his daily bread, by pumping out adrenaline,

Sometimes by throwing people down the aircraft for a dive,

He was not just a random skydiver for many,

He was the person to be looked up to,

Where every jump for his clients was a matter of life or death,

For him, it was an escape for reality,

He plunged to death a lot of times,

With a failed relationship, Among many other hurdles,

He spread smile on the faces who opted for him as an instructional skydiver,

Where the world ceased to be novel,

As they did a touchdown,

Their first ever emotion was recorded by him via a strong hug,

Behind the camera, Things were different,

Where a Celebrity was busy showing-off the dive,

He was shit-scared of death,

Where a widow plunged with a hope that she would meet her husband in the blue sky,

Where a billionaire just wished his parachute wouldn’t open to see who would attend his funeral,

Where a soldier enjoyed his moments just after the jump reminiscent of the time of his deployment,

Things were not the same for everyone, They never were,

The world was no different from up there, It was just the same,

It’s just that you feel like you own the skies for 10 seconds,

But you know that you have to pay the rent for it, It doesn’t cost you in Euros or Dollars,

It costs you your Dreams!

P.S: I hope you loved this little creation of mine based on a skydiver’s story of how he sees things from 16,000 feet. All it takes is a cruel amount of hard work to own the skies!!

12 thoughts on “Canopy – Story of a SkyDiver”